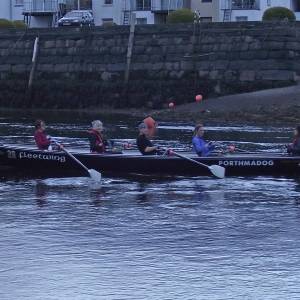 Some of Madoc Yacht Club members from Clwb Rhwyfo Porthmadog, North Wales will row from Arklow in Ireland to Aberystwyth as part of the Celtic Challenge sometime between May 4th-7th weather permitting. It’s a gruelling 100 mile race across the Irish sea.

Teams of 12 will row for up to 24 hours in 24 feet long Celtic long boats in what is regarded as the worlds longest true rowing race. Geoff Wood Chairman of the Madoc Rowing Club said “It’s a hard slog and it depends on what the Irish Sea is like. It can be fluid and calm or you can be rowing through the night with wind and rain blowing from all sides”. “We’d like to win it. We’ve got a really strong team this year so we’ve got a chance to win it”. Geoff added that the team had been stepping up their training exercise recently and had been training themselves to row at night in rougher conditions. It’s not the first time the team has competed in the race. Each team in the race take it in turns to row, spending the time inbetween, on a support boat. A small inflatable is generally used to transfer people between the support boat and the rowing boat. How often teams swop rowers and how people are utilised is all part of the tactics of the race. Andy Wood Vice Commodore of Madoc Yacht Club wishes the rowers good luck and a safe race.

They have also been chosen to accompany the Queens Thames Diamond Jubilee Pageant flotilla on Sunday June 8th when two Celtic long boats from the club will join the procession on the Thames with up to a 1000 boats of all kinds in what will be regarded as one of the largest flotilla’s on the Thames. “It’s a massive honour” said Geoff Wood “We’re the only Celtic long boat club with two boats participating.

Andy Wood said “We are proud of our members who are taking part in the Queens Diamond Jubilee Pageant”.

If you are interested in selling your boat, or require more information about buying a boat:Contact Boatshed North Wales 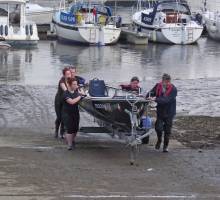 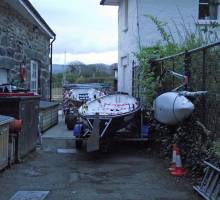